In 2017, Giving Tuesday donors raised over $300M for nonprofits, with average online donations of $120.40 per donor. Over 2.5 million donations were made. Social media impressions for nonprofit endeavors crossed 21.7 billion. Clearly, Giving Tuesday has become a miracle in the fundraising world. But it's still underutilized.

Even organizations savvy enough to run a comprehensive Giving Tuesday fundraising campaign focus too much on securing quick, one-time donations with little thought on winning donors over as ongoing supporters. The truly successful organizations have ongoing support bases; a solid foundation of monthly contributions which allow them to plan spending and campaigns properly. These organizations can focus more on spending funds raised, rather than repeatedly going back to re-earning them.

The degree to which organizations across the country fail to convert one-time donors to ongoing supporters is staggering. In fact, if you're the average nonprofit, less than 50% of your donors this year will donate again next year (much less continue donating monthly). If they're first-time Giving Tuesday donors to your cause, you can already say goodbye to them. The annual retention rate for new donors is only 11%.

So How Does One Retain Donors?

The easiest way to retain donors is just to talk to them. Below are reasons cited by consumers for why they've discontinued donations to a cause, according to Joanne Fritz, the Nonprofit Organizations Expert for The Balance. 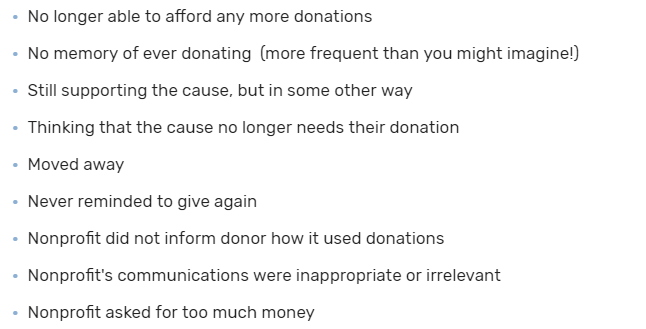 Many of these reasons relate to poor follow-up, limited ongoing communication, or a lack of accessible continued giving options. These all have relatively easy fixes.

Remember that your donors gave to you this Giving Tuesday for a reason. What is that reason? The reason for the first-time donor's contribution to your cause is probably quite different from your existing annual donor base. You need to identify what factors drove them to give to you in the first place, find common threads among first-time donors, and capitalize on the reasoning that attracted them.

Did donors want to do good while shopping? Enable them to be a #CaringConsumer with something simple in the background of their spending, something like roundup donations.

If they identified with a story highlighted in your #GivingTuesday social media push, survey which parts of that story appealed most and continue similar messaging in future content.

Did they see your cause as the easiest way to donate to something impactful? Then ensure you maintain accessible donation channels and communicate the extent of your impacts appropriately.

Understanding donor base motives takes work, but it's the only way to keep donations flowing in the long run.

As shown above, multiple reasons for donors falling off are related to a donor not seeing a significant need for their continued participation in your mission. You turn a donor into an advocate by emphasizing how important they are in your journey of impact.

Many Giving Tuesday donors will likely donate $120 this year. Convert that donor into a monthly supporter to turn that $120 into $240 by this time next year.

(By the way, donors are more likely to contribute roundup donations than monthly recurring donations, even though they both amount to the same thing for you in the long run.)

We won't be humble because we want you to succeed: With our Roundup Donations model, we can earn you $25 a month per supporter — that's our current average. It's the easiest way for a supporter to contribute ongoing donations to your cause. Additionally, our platform also helps you communicate to donors which objectives your organization has accomplished. The value from a Sixpence campaign extends far beyond donations alone.

Turn your one-time Giving Tuesday donors into lifetime donors. Create advocates for your mission and give them easy methods to support you continually. Follow up and ensure they know how integral they are to what you do. Your success, and the success of all those you help, depends on it.

Get Involved In Your Child's Education!

5 Steps to Success for Your Classroom Budgeting

Roundups: Fundraising for the 21st Century